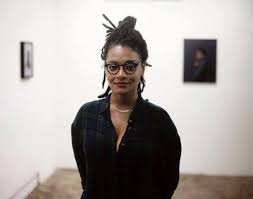 During those days, the painting takes place in general hours Monday through Friday from 10:00 a.m.to 6:00 p.m.  The Woman’s Club of Englewood and the Teaneck Englewood And Vicinity Club of the National Association of Negro Business and Professional Women’s Clubs, Inc. also sponsored the filming of a video of this special project.  The filming documents the project and mural process, as a memorable event in women’s history in Englewood.  In addition, the design will be painted and revealed on the east-facing wall of The Women’s Rights Information Center building, located at 108 West Palisade Avenue in downtown Englewood, New Jersey.

Fazlalizadeh, a Black-Iranian visual artist and Oklahoma City native, is a painter, whose work ranges from the gallery to the streets, using visual art to address the daily oppressive experiences of marginalized people through beautifully drawn and painted portraits.  Her street art series, “Stop Telling Women to Smile”, addressing sexual harassment in public spaces, also appears on walls across the globe.  In addition, in 2019, she was the inaugural Public Artist in Residence for the New York City Commission on Human Rights.  Furthermore, The New York Times, NPR, MSNBC, the New Yorker, and Time Magazine profiled her work.

The mural celebrates Black women’s voices, raises awareness about Black suffragists, and encourages civil discourse within the community.  The official reveal of the Black Women’s Mural takes place on November 14 at 3 p.m. outdoors.  The Foundation and its partners invite the public to celebrate the completion of this project.

Celebrate the Contributions of the Arts

During National Arts & Humanities Month, the NNJCF’s ArtsBergen initiative joins other artists and organizations to bring the message  the arts’ contributions to communities in northern New Jersey.  This became the country’s largest annual collective celebration of the arts and humanities.

“Whether you watch or listen or do it yourself, the arts allow us to explore ideas, express emotions, and better appreciate other cultures. National Arts and Humanities Month is an opportunity to enjoy a little more art for yourself and to recognize and celebrate its positive impact.  I hope that everyone will take part to celebrate and recognize the creative and cultural value of the arts and humanities in our communities,” said Nolen V. Bivens, president and CEO of Americans for the Arts.