ArtsBergen to Present Arts at SACKtoberfest

This fall, the Northern New Jersey Community Foundation’s ArtsBergen presents a range of public arts programming at Hackensack’s SACKtoberfest. Organized by The Sack Business Alliance and the City of Hackensack, the fun-filled festival returns to the city on October 15 from 1 to 8 p.m. at Atlantic Street Park.

ArtsBergen, an initiative of the Northern NJ Community Foundation, will present three public arts programs around the theme of storytelling.

Community Tiled Mural runs from 3:30-5:30 p.m.   The nonprofit co-Lab Arts undertakes a mission to engage artists, social advocates, and communities to create transformative new work. In collaboration with muralist Amrisa Niranjan, they plan to design an arts mural to cut into tiles. Furthermore, festival participants will actively participate in the development of the mural by sharing their own ‘Main Street moments’ on the tiles. In addition, a photo of the finished arts mural and the stories will be incorporated into the ‘Stories on Main Story Map’ on The SACK Business Alliance’s website. 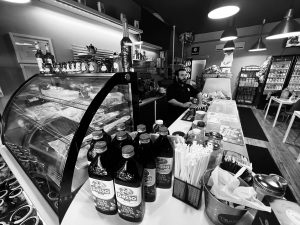 Marco Daniele works behind the counter at Coffee Break, one of the businesses featured in the docuseries to be shown in the arts program at SACKtoberfest. Photo Credit: Dana Glazer

The ‘Stories on Main Street’ Docuseries presents two showings at 4:00 p.m. and 5:30 p.m. The screenings take place at the Hackensack Performing Arts Center (HACPAC).  The HACPAC is located at 102 State Street.

The last arts program, The Hacktivator’, runs from 4:30 p.m. to 6:30 p.m. Two sets of actors perform a participant-prompted comedy improv and ‘mad lib stories’ for participants activating the Hacktivator booth. Confirmed actors scheduled to appear are Howdy Stranger and Claire Porter. ArtsBergen invites SACKtoberfest attendees to activate the ‘Hacktivator’ and watch the actors create a personal comedy performance just for them. 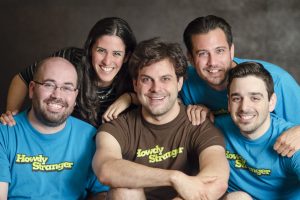 Furthermore, the arts programs are made possible in part by a grant administered by the Bergen County Division of Historic & Cultural Affairs from funds granted by the New Jersey State Council on the Arts. Funding is also provided by the Alfred N. Sanzari Family Foundation.

ArtsBergen, a regional arts alliance, works with various stakeholders. These stakeholders encompass artists, arts organizations, businesses and municipal leaders.  Additionally, by working together, they use the arts to shape the social, physical, cultural, and economic identity of communities. Creative placemaking, a community-led, arts-driven approach, increases vibrancy and spurs economic development.  This approach builds capacity because residents take ownership of their communities.