The Northern New Jersey Community Foundation’s ArtsBergen initiative announces the selection of artist Nina Tsur of New Milford, New Jersey to beautify and transform the Borough of Oradell’s Walter Schirra Park with public art featuring originally designed and positioned asphalt decals on the ground. The Fondation’s  ArtsBergen initiative is partnering with the Borough of Oradell in New Jersey to implement and install the interactive design using the park’s sidewalks leading to the gazebo to create an engaging, visually pleasing space. 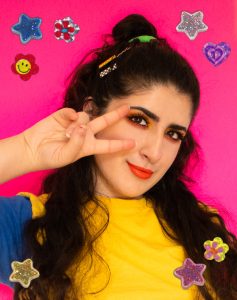 “Ms. Tsur’s bold, colorful, and graphic work lends itself well to the project’s outdoor environment and the use of two-dimensional decals on a canvas of cement on the ground. Her art is also fun, eye-catching and will be easily understood by the park’s passersby. The installation’s key goal is to engage all Oradell residents and visitors by being interactive. Ms. Tsur’s simple imagery will appeal to children and her clever, humorous messaging will interest young adults and adults,” said Danielle De Laurentis, Associate Director, Northern New Jersey Community Foundation (NNJCF).

A top priority of this creative placemaking project involves engaging the community.  Furthermore, the project wants to capture their vision, input, and preferences for these public places’ look and use. The NNJCF and the Borough canvassed Oradell residents on social media.  Residents identified the theme they wanted to see in Walter Schirra Park. In response, the community provided the overall themes of exploration and space.  They also identified historical sites, flowers, and birds found in Oradell. Tsur will incorporate one or more of these themes into the installation. With the design process underway, the NNJCF anticipates installation takes place at the end of July or the beginning of August. This program is made possible in part by a grant administered by the Bergen County Division of Historic & Cultural Affairs from funds granted by the New Jersey State Council on the Arts.

This aspiring artist received several awards.  Tsur was a finalist in the Giphy Micro Film Festival 2019.  She also received the Motion Graphics Gold Award for the Graphics New Talent Annual 2019.  Furthermore, Tsur’s accolades include the Motion Graphics Merit Award for The One Club: Young Ones Student Awards 2019.  Tsur also holds a Bachelor of Fine Arts in Graphic Design and Motion Design from the School of Visual Arts.  During 2017 and 2019, her work appeared in the school’s Motion Graphics Showcase.