In 2021, Englewood Black women and the community-at-large participated in several public workshops.  During the workshops, they provided feedback about the mural’s design. The mural features Black women leaders from the past and the present. These leaders include suffragist Ida B. Wells and Dr. Josie Carter, an original member of the Women’s Rights Information Center’s board of directors.  Activists protesting segregation at the city’s Lincoln Elementary School also appear on the mural. Other people shown include Hali Cooper, an Englewood resident, who walked in the Black Lives Matter march. Finally, Kia S. Thornton Miller, whose family has lived in Englewood for several generations, and her daughter Toni Michelle Miller, a ninth grade student at Bergen County Technical Schools, were painted on the mural. 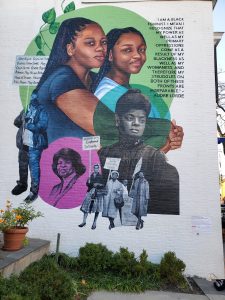 The mural celebrates Black women’s voices, raises awareness about Black suffragists, and encourages civil discourse within the community. In addition, the mural sparked pride recognizing and honoring the Black community’s contributions.   This occurred with a large-scale public artwork located in one of the busiest downtowns in Bergen County, New Jersey.

Other art also appeared at the celebration.  Earlier in the month, Arts Horizon hosted a Black Girls Empowerment workshop. Englewood youngsters in the sixth to ninth graders attended and created mini-murals inspired by the bravery of the Black suffragists.

The NNJCF’s ArtsBergen initiative oversaw, fundraised and facilitated the project. “The success of this project was evident by the faces in the crowd full of pride and even some tears. The Black Women’s Mural beautifies downtown Englewood.  In addition, the mural expresses the voices, culture, and stories of the Black suffragists and Black woman of the city. The artwork also elevates the value of their activism and generates ownership of place, said Danielle De Laurentis, Associate Director, Northern New Jersey Community Foundation.

“It was a pleasure to work with our partners — The Women’s Rights Information Center, Metro Community Center, and the Woman’s Club of Englewood — and also members of the community, who each played a role in making the project a success. The Northern New Jersey Community Foundation’s ArtsBergen looks forward to continuing its work with the community and the City to create more meaningful public art.”

Several leaders from the community spoke about the project’s merits.  They also discussed the completion of this special project driven by Englewood Black women and the Black suffragists.  Speakers included De Laurentis, Fazlalizadeh, Lil Corcoran from the Women’s Rights Information Center, and Jacqueline Wisner from the Woman’s Club of Englewood.  In addition, Peggy King Jorde from King Jorde Culturals, Lynne Algrant from the NNJCF’s Board of Directors, and Lauren Nance from the League of Women Voters of New Jersey spoke.  Englewood Mayor Michael Wildes, Englewood Councilman Charles Cobb, and Englewood resident Toni Michelle Miller joined them. 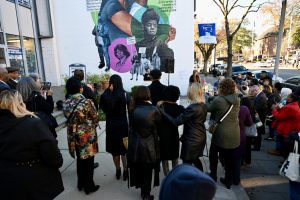 The public listened to speakers at the reveal celebration of “The Black Women’s Mural Project”. Photo credit: Sam Lee

“What are you willing to do to make change? asked Corcoran, Executive Director of the Women’s Rights Information Center. “People suffered to give us these rights. Everyone can do something.”

“If a picture is worth a thousand words, we have been given a history book,” said Wisner, Treasurer, Women’s Club of Englewood.

From October 28 through November 11, the public came and watched Fazlalizadeh paint the mural. The filming of a video also documented the project, as a memorable event in women’s history in Englewood.   The Woman’s Club of Englewood sponsored the filming of the project.  The Teaneck Englewood And Vicinity Club of the National Association of Negro Business and Professional Women’s Clubs, Inc. also contributed.