The $1,000 scholarship award goes to a student seeking to further his or her education.  The student is a member of an athletic team and holds a B grade point average or better.  In addition, the recipient demonstrates some financial need. “Most importantly, the recipient must demonstrate the ability to relate to everyone, be a true friend, and be humorous. We take pride in the Ralph Gregg scholarship being different because its main focus is not on academics or athletics but on friendship and being a great classmate. Frequently, this is the only scholarship our recipient receives,” explained presenter Doug Bauer. 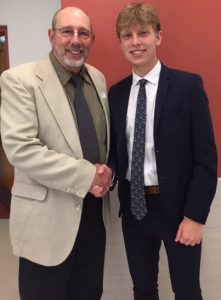 “I wouldn’t have been able to achieve the great things I did in high school, if it were not for the amazing friends who have supported me along the way. I was delighted to be recognized for my friendship in receiving this scholarship, but I feel the real award goes to everyone else; the real award goes to all of my friends who have stuck by me throughout these four years at Leonia High School,” said Edelman.

Throughout his high school years, Edelman assumed several leadership positions.  During his senior year, he served on the executive council as treasurer and was named captain of the soccer team. His athletic record includes playing on the Leonia High School varsity soccer team for four years.  Similarly, he played three years on the varsity track and field. Along with these activities, he played club soccer with Blau Weiss Gottschee FC and the NJ Stallions Academy.  Notably, he was awarded the team’s most valuable player this year and recognized as First Team All-League.

Music also comprised a prominent part of his extracurricular activities. He performed with the high school band, the Jazz Ensemble, and the Wind Ensemble.  In addition, he sang with the Men’s and the Chamber Choirs. A member of the DECA chapter for four years, Edelman attended the international convention twice.  He also worked with a local business to improve its corporate social responsibility and customer service. This fall, he plans to attend the University of Pittsburgh and major in radio, television and film.

Edelman and the namesake of the scholarship, Ralph Gregg, shared an interest in a local Leonia park. “Ralph spent almost every summer day with his buddies playing at Wood Park. Ethan spent the last two years working as a counselor in the summer camp held there,” explained Bauer.

“When establishing a donor-advised fund, donors create a legacy of charitable giving.  They recommend grants to causes of interest or in honor of a deceased loved one. They can also name successors to continue the giving beyond their lifetime. Tax benefits also exist. All contributions to donor-advised funds are tax deductible to the extent allowed by law,” said Danielle De Laurentis, Associate Director, Northern New Jersey Community Foundation.

For further information about the NNJCF, The Class of 1964 Ralph Gregg Memorial Scholarship Fund, or to set up a charitable fund, call 201-568-5608 or send an e-mail to nnjcf@nnjcf.org.