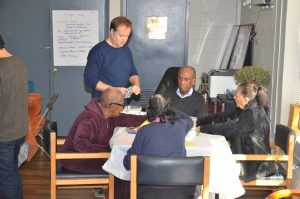 Community Foundation Week, an effort created in 1989 by former president George H.W. Bush, raises awareness about the important role of these philanthropic organizations.  They foster local collaboration and innovate solutions to address persistent civic and economic challenges. In observance of Community Foundation Week, the NNJCF launched Build-A-Village during October and early November.  The project addressed the public health need of senior citizens experiencing loneliness and isolation.

Statistics about senior citizens in the area reveal a burgeoning population with specific health issues. According to the U.S. Census Bureau, senior citizens make up nearly 15% of New Jersey residents with 1.292 million people ages 65 years and older. In Bergen County, more than 16% of residents are senior citizens, higher than the national average.

Results from an Age-Friendly Englewood Coalition survey identified social isolation as a critical issue for seniors. To reduce this isolation, they proposed older adults be engaged at home and develop mechanisms for residents to meet each other regardless of race, religion, age, or geography. According to the American Association of Retired Persons, isolation and the feeling of loneliness create health problems.  As a result, anxiety, depression, illness and abuse on seniors occur.  The impact on people’s health is worse than tobacco and obesity.

“The Northern New Jersey Community Foundation’s ArtsBergen initiative appreciates the arts.  This is a valuable tool to address community issues such as isolation. Build-A-Village gives seniors an opportunity to share their voice with one another and the community-at-large through interactive mural-making and publicly showcased work, instilling a sense of connection, encourages civic pride, and beautifies the city of Englewood,” said Danielle De Laurentis, Associate Director, Northern New Jersey Community Foundation. 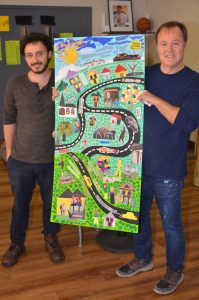 The NNJCF partnered with Bergen Family Center and the Southeast Senior Center for Independent Living (SESCIL) in Englewood.  These organizations hosted the public art project for seniors in the county. Furthermore, professional teaching artist/muralist Dan Fenelon led the workshops, bringing together participants to explore creating an ideal community through art. Senior citizens used their imagination and connected with others via the arts. Through the series, new friendships developed.

“This has been a very meaningful program for the seniors.  The experience provided the seniors with a creative outlet to express themselves, work together on a project, and interact with a professional artist.  This gave them another opportunity to socialize,” said Liz Corsini, VP-Director of Programs, Bergen Family Center.

“The seniors really enjoyed participating in the Build a Village project!  It was well attended.  Almost everyone stayed for the whole six weeks of the program,” said SESCIL Executive Director Scott Reddin.

In early December, see the completed art collages showcased in shadowbox windows next to the Bergen Performing Arts Center leading to ShopRite in Englewood, New Jersey. Afterward, in the summer, they move into storefronts in the central shopping district

Individuals and businesses may support this pilot project and its replication with a tax-deductible donation, as permitted by law. Donations may be made online under the tab, The Creative Placemaking Fund. Also, send contributions with a check made out to ‘The Northern N.J. Community Foundation’ with ‘Build a Village’ entered in the memo line.  Then, mail checks to the Northern New Jersey Community Foundation, 1 University Plaza, Suite 128, Hackensack, New Jersey 07601. To date, partial funding for the project is provided by Age-Friendly Englewood. For further information, call 201-568-5608 or send an e-mail to nnjcf@nnjcf.org.